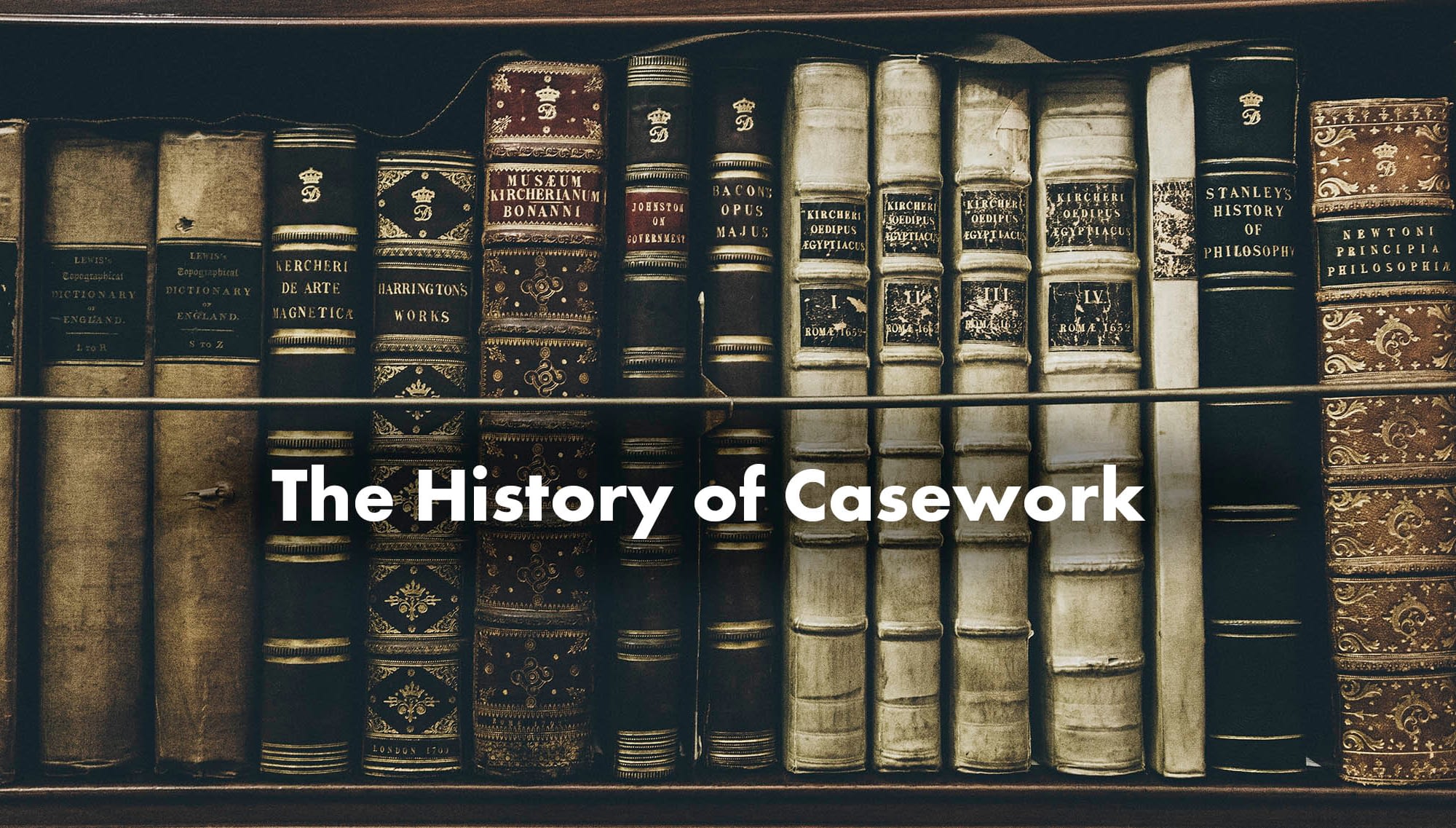 What is casework? Don’t worry, it doesn’t have anything to do with social work, at least not in this case.

Casework (also known as case goods or case furniture) is any furniture made of flat panels, forming a box. This can be as simple as a wall cabinet or as complex as entertainment centers and beyond.

Casework varies from millwork in its construction. Casework is made up of panels and is usually a stocked or standard product; millwork is custom crafted, usually in a mill. Millwork includes things like trim or crown molding that are made from lengths of lumber.

While millwork is historically customized, casework is more standardized. At IDB we like to blur that line and push the definition of what commercial casework and case goods can be.

To understand the present and the future, we must first look into the past. Looking back into furniture’s past shows us how far we have come since the first humans decided they need somewhere to sit, sleep, eat, and store their things.

Let’s go back in time a year or three. Before the terms casework and millwork were coined, ancient humans and civilizations were using the first forms of furniture and containers thousands of years ago. This is mainly due to the shift from nomadic hunters and gatherers to more permanent settlements that began to farm and cultivate crops.

Earlier nomads traveled light, without very many personal possessions. The emerging farmers and sedentary humans, however, were able to retain items since they had a permanent home.

The earliest discovered furniture is dated back to 3180 BC to 2500 BC. Situated on the Central West Coast of Scotland’s Mainland Island, the prehistoric village now called Skara Brae is home to neolithic home structures from roughly 5000 years ago.

Initially unearthed and discovered during a brutal storm in 1850, the structures weren’t properly investigated until another storm in 1925 further exposed the dwellings. Following this, an archeological survey was commenced.

The dig revealed how the former owners lived. Archaeologists found a common theme within each home. All of the homes were stocked with a crude fireplace, beds, chairs, shelves, and other primitive furnishings all made from stone. Stone was the material of choice, likely due to its abundance and lack of alternatives.

In slightly less ancient times, the Egyptians, Romans, Greeks, and Mesopotamians all used a variety of beds, couches, chairs, stools, and boxes made out of wood and stone.

Moving into the Middle Ages, furniture became less of a commodity following the collapse of the Roman Empire. It was a couple of hundred years until Germanic peoples invading Europe developed and advanced the poor state of furniture back to a level of prominence seen with the Romans. Researchers have been able to unearth very little evidence, mostly due to the lifespan of wooden materials. This is also due to the limited number of pieces built, to begin with.

In the late Middle Ages, furniture slowly evolved into something closer to what we utilize today. Advancements such as drawers, frame and panel construction that allowed for much larger finished surface areas, and much-improved joinery methods, in particular, the mortise and tenon and the miter joint were all developed during this time.

The mortise and tenon joint leaves a small ledge protruding off of the end of one piece (tenon) that is inserted into a slot or groove cut into the receiving piece (mortise). This increases the joint strength significantly. The miter joint allowed for a much more visually appealing seam when 2 pieces meet at an angle.

The next great change came with the Industrial Revolution (1760-1840). A brave new world had emerged, bringing with it marvelous technological advancements, the first of which being steam power. Steam made the largest impact on the furniture industry through the processing of raw materials. Mills were among the largest users of steam-powered equipment.

One of humanity’s biggest benefits from this time is the invention of interchangeable parts. No longer were replacements or repairs needed to be done as a one-off or by hand. If a component needed replacing, we are now able to simply swap it out for another one just like it.

This is a major element in the development of casework from traditional millwork and hardwood furniture. After all, casework is essentially several interchangeable furniture parts assembled into the final unit.

Development of Bakelite and Laminates

Modern casework, including what we build here at IDB, is often manufactured using thermally-fused laminate (TFL) panels. TFL panels are most commonly constructed of an engineered wood sheet (i.e. MDF or Particle Board) that has been laminated with decorative melamine.

The melamine layer begins as a paper and is then impregnated with melamine resin and infused into a single layer. The melamine, paper, and wood core are all pressed together with heat creating the finished sheet.

Melamine and artificial laminates can trace their family tree back to the development of Bakelite. Bakelite, if you don’t know, is the precursor to our modern-day plastics. Chemist Leo Baekeland developed it in New York in 1907 and was granted a patent for his new material on December 7, 1909.

A few years later, Bakelite made its way into an enormous variety of products and industries. In 1913, two electrical engineers developed, patented and started a company around a new product containing the Bakelite resin. That company was Formica.

What Formica had developed was the laminate sheet, which later evolved into the High-Pressure Laminate (HPL) and TFL panels we use today.

In addition to the improvement of materials, advancements in machinery also helped to pave the road to our current industry. In the late 20th century, computers and modern technology had begun to emerge, opening the door for a wide range of new products and ideas.

Most modern shops employ Computer Numeric Controlled (CNC) routers and saws to cut out the individual panels that make up the final unit. Benefits of using a CNC router are:

What may the future hold?

We suspect that materials will continue to improve. Durability, weatherability, weight, cost, and environmental impact are certain to be top priorities in the coming years.

Design is bound to be a major player in the industry of the future. Designs of laminates and finishes are making huge strides forward each year. Textured surfaces and premium patterns are becoming increasingly popular as designers grow more adept at creating realistic finishes. Consequently, engineered laminate use continues to grow. This growth is well deserved if you ask us — they’re beautiful!

Product construction and design are also likely to continue to drive the progression of casework. As computers and software become more and more powerful, the line between designers’ imaginations and reality is quickly fading. With virtual reality (VR) on the horizon, being able to have total immersion in the design space could be a game-changer.

Beyond design technology, production tech and capabilities will continue to improve as well. Each passing year gives us better electrical components and hardware, allowing those modern, imaginative designs to be produced into our physical reality.

Increased precision, faster production times, and higher capacities are certain to be major players in the future casework industry.

At IDB, we strive to ensure that the future of the case good industry is exciting and fresh. In a perpetual attempt to satisfy our thirst for innovation, IDB will help Imagine, Design, and Build the future of commercial casework.

In the design world, there are 2 types of files- Vector graphics (ai, eps, pdf) and Raster graphics (jpg, png, tiff, bmp). Vector graphics are generated using mathematical and geometrical equations to represent shapes, letters, and numbers, but don’t worry about getting your calculator out, the math is all handled behind the scenes with computer magic. Vectors are great because they are able to be scaled from business card size all the way up to billboard-sized or more without losing any quality in the image. Vectors are the preferred format for logos and other brand graphics, due to their versatility.

The main that thing vectors aren’t, however, are photographs. Where a vector can be scaled without losing quality, I am sure we are all familiar with what happens to a medium or low-resolution photo when it is blown up. It becomes pixelated, or ‘blocky-looking’ and all around not great to look at, as you can see by many of the pictures on this page.